I made trousers for the first time.

Were they easy? Were they heck.

I used one of the Amazing Fit patterns after reading a bunch of sewing reviews about how good this pattern is. Clearly these people are far smarter than me because I thought this pattern was a nightmare.

Pattern: Simplicity 1696
Fabric: stretch denim on sale on Minerva crafts for £4 a metre and some stripey lining fabric also from Minerva for the pockets.

You measure your hips and your waist and it can tell you if you’re an average fit or curvy fit. I was average apparently.
Then you choose your pattern size according to your measurements.

Horrifyingly it said I was an 18 *faints*. But the rule of sewing patterns is I shouldn’t look at the size – just the fit.

I was worried though – the pieces looked huuuuuuuge. So before I did anything I tacked the pieces together just to see what they looked like and it turns out I was making gigantic clown pants not close fitting slim fit trousers. Gaaaa.

Anyway – again I decided to suspend reality and just follow the pattern and see where it took me.

The fly was a bit of a fiddle but looks quite good I think. I liked the pockets though they’re probably overly big for my needs. I ditched the fake pockets on the back – I tried a few ways of putting them on but they all looked fake and rubbish.

Finally it came to the fitting. I had hoped once I’d done all the fiddly bits the trousers might be more of a reasonable size but they weren’t – they were still huge. Even more annoying the waistband pieces were about 2 inches too short so I had to bodge some new ones with scraps.

All in all I took 5 inches off the waist – 5 freaking inches! 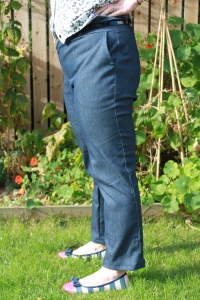 After these photos were taken I reduce the waist band size in half to make them less Simon Cowel’esk. I also adjusted the crotch a bit since it was a bit baggy.

I will try again though with this pattern but will start with a much smaller size. I might also ditch the front pockets or at least make them smaller and less bulky. I think I’ll also make the trousers a touch longer. I don’t have long legs but even for me they’re just an inch too short.

So overall my summary is: They’re not terrible. Damming praise? Probably.