I made troosers! Or for the non-Scots speakers out there I made trousers. And they’re actually pretty good – yee haah!

This was my second ever attempt at trousers. The first pair of trousers I made (here) I decided were not terrible when I finished them. Damning praise. However these trousers I really like therefore I’m clearly improving. Hurrah!

These ‘Creased Trousers’ from Burdastyle were on my list of 2015 challenges. So if I carry on at this rate I’ll have them all finished by February!

There was a whole series of firsts for me in making these trousers. Including:

The first was essential for the pattern, the second was because I know of my awkward fit issues with shop bought trousers, the third was because it was New Years day and I wanted some bias binding tape but the shops were shut. Its amazing what you can be forced to do by lack of shops!

I also made a few classic errors in this pattern. I’ve never used a pdf Burdastyle pattern before. The instructions were flaming awful. Would it really hurt them to use a paragraph or a bullet point every so often? Its not like it costs them more in printing – its a pdf!

Error #1: So after making a toile I realised that it needed a bit of ease across the thighs (years of swimming, rowing, skiing etc means this is always my problem area when buying trousers). So I spent ages trying to redraft the pattern to make it fit there. Once I’d cut the fabric I went back to the instructions and realised I was meant to have had added a 2cm seam allowance anyway – d’oh!!

Error #2: I was also meant to add 4cm to the hems – considering I had to cut 4cm off these trousers I think I was safe in not adding them it on. At 5’5″ I’m clearly considered petite by Burda!

Error #3: I was meant to use a black zip but didn’t have one and couldn’t be bothered going to buy one. I hoped it wouldn’t be noticeable. I was wrong. But I’m going to brazen it out and pretend it was a ‘design feature daaaarling’.

Anyway given the rubbish instructions from Burdastyle I had to rely on online tutorials for some of the techniques.

Thank goodness for the internet because despite Burdastyle’s best attempts to outfox me I declare these trousers a success.The other cool thing is I have quite a bit of fabric left over. I’m contemplating making a blazer with the fabric so I can have a suit. Which would be cool except hippies like me don’t tend to wear suits very often…. 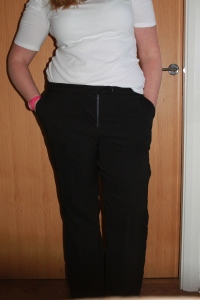 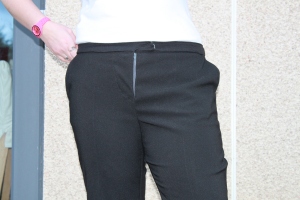 ‘scuse the chickens. They were desperate to get into the photo.